We had FANTASTIC gig at The Arena Theatre in Wolverhampton on Friday. It was a real trek getting there and back through 80mph wind gust and sheets of rain, but it was well worth the effort. Thanks to everyone who braved the weather to get there.  A wonderful, appreciative audience. And thanks very much also to Alison and her great production team at The Arena for looking after us so well. We’re looking forward to seeing you again very soon! 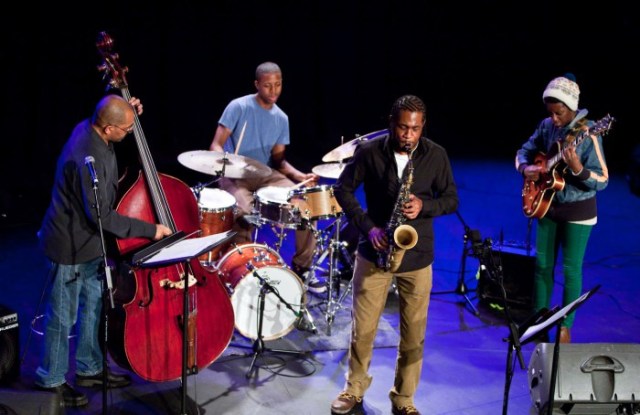 Bassist Gary Crosby has long been a key figure on the scene, and he has the knack of creating some exceptional musical surprises.

As the boss of Dune Music, as artistic director of Tomorrow’s Warriors and as leader of the Jazz Jamaica All Stars and his bands Nu Troop and Guava, Gary established himself as a key figure on the scene, working with major established artists and also providing a platform for a great deal of exciting new talent.

His current band – Groundation – marks another milestone in the bassist’s career, featuring him with three acclaimed young players: alto saxophonist Nathaniel Facey (of Empirical), guitarist Shirley Tetteh, and drummer Moses Boyd. On Friday the musicians battled their way from London through the storms and reached the Arena Theatre…