Wow! Another 4-star review for Jazz Jamaica All Stars, Urban Soul Orchestra and Brinsley Forde, this time from Rob Adams writing for the Herald about the grand finale to the Catch A Fire tour and closing night of the Lively Up! Festival. And what a night it was!

Warm and very special thanks go to the Tinderbox Orchestra for setting the fuse for the final gig of our first Catch A Fire tour (we hope to do more!), and helping to make the closing night of the Lively Up! Festival utterly electric. You guys didn’t get a mention in the Herald review, but we were all seriously impressed with your performance and look forward to working with you under the aegis of Tomorrow’s Warriors. Soon come…!

We had a ball at Usher Hall. Big thanks to Karl Chapman for keeping faith with our ability to deliver the most amazing show. With over 1,000 pre-sales, we knew we were going to have a fantastic audience for our last night and what better place to have our party than in Edinburgh. It was a blast and we’re all still buzzing from it. Brilliant!
Meantime, here is the 4-star review (thanks Rob!):

“Tweet if you’re having fun!” was the instruction from the stage and the information sheet handed out on arrival. It took a song or four before visible signs of enjoyment broke out in the audience, which wasn’t due, surely, to bassist and artistic director Gary Crosby’s mock-stern “don’t dance, this is serious music” directive being taken literally. But once one lone dancer had led the way, there was as much of a party going on in the stalls as there was on the stage. READ ON…

A fab review by the great Paul Bradshaw (Straight No Chaser) on his blog Ancient To Future – thanks Paul!

The Lively Up tour arrived in London town last night and the Queen Elizabeth Hall was rammed to capacity. There was genuine sense of anticipation in the air and as one scanned the stage which was set up to accommodate not just a full force – 30 strong – Jazz Jamaica but also the strings of the Urban Soul Orchestra one wondered how this project was going to drop…Read on

Ooh, another excellent review, this time from Black Music specialist, Kevin Le Gendre writing here for Jazzwise Magazine. Those of you who attended the Catch A Fire talk at the British Music Experience at the very start of the Lively Up! Festival will remember Kevin chaired an eminent panel of Tony Platt, Gary Crosby and Brinsley Forde talking about the making of Catch A Fire and its global impact.

Like everyone else who went to the London Catch A Fire live show, he had a fantastic time! 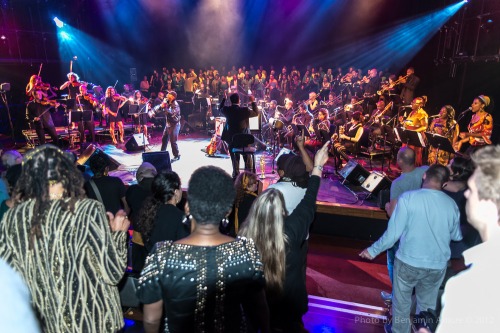 In 1973, when Bob Marley & The Wailers cut Catch A Fire, a landmark album not just in reggae but modern popular music, Jamaica as a sovereign state was just over a decade old. No greater celebration of the country’s 50th anniversary of independence could be conceived than in the form of Jazz Jamaica All Stars’ take on that chef d’oeuvre, because, to a large extent, the ‘small island’ has grown up with that original rebel music, so proud and defiant in tone, as an unofficial soundtrack. The re-imagining is about scale.

Alongside the 18-piece British big band appearing at the QEH earlier this week, are the eight strings of the Urban Soul Orchestra, the three backing singers of ‘Dem Threes’, and the lead vocal of Brinsley Forde, once of UK reggae pioneers Aswad.

In the second half of the gig, when the backdrop disappears to spotlight 72 choristers from Voicelab, the Wailers’ five-man unit will have been ‘bigged’ up beyond expectation. As is apparent from the new scores of ‘Concrete Jungle’ and ‘400 Years’ this expanded palette serves a dual purpose: to show the absolute richness of the melodies penned by Marley and Peter Tosh and to push their harmonic implications into logical and unforeseen places. While double bassist-bandleader Gary Crosby (pictured above with Jason Yarde), and drummer Rod Youngs nail the offbeat down pat, Jason Yarde’s arrangements are imperious. His blend of full-bodied, singing motifs and stark, flinty interludes, particularly for the strings, captures and bolsters the melancholia and menace of the source material, as Forde makes an impressive fist of giving the original words requisite emotional depth and tonal precision. However, the sharpest twist in the tale of what proves a joyous, out-of-the seat performance is the subtext of classic R&B freighted in the leisurely but heavy punch of the music. It becomes explicit in the puckish quotes of ‘One Mint Julep’ that fit the easy skanking like a glove. A Ray Charles fan like Marley would’ve been irie.

Here you go! Another review of the London Catch A Fire show, this time from London Jazz News.

1962 saw Jamaica confirm its status as an independent country. Last night saw the London leg of the Lively Up! Festival tour at the Queen Elizabeth Hall, one of 7 dates around the UK celebrating this with a reworking of Bob Marley and the Wailers’ seminal debut Catch a Fire, plus other well-known tunes.

The sold out concert featured the Jazz Jamaica All Stars, The Urban Soul Orchestra under the baton and watchful eye of Kevin Robinson, and Voicelab.  Read more… 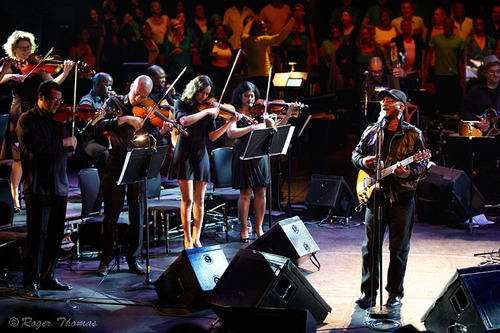 Gold medal for the first review out of the blocks goes to the lovely Stephen Graham, with pics by Roger Thomas. (Thanks for coming Stephen and Roger – was great to see you!)

With over 110 people on the stage of the Queen Elizabeth Hall in London last night the Jazz Jamaica All Stars, Urban Soul Orchestra and Voicelab with special guest Brinsley Forde celebrated 50 years of Jamaican independence in some style with a themed concert based on Bob Marley and the Wailers’ 1973 classic album Catch a Fire.  Read on…